The Side God is On 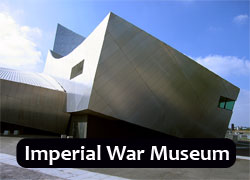 The Imperial War Museum (North) is about two miles outside Manchester City centre and just a stroll from Old Trafford. It is well worth a visit if you are ever over at United-land. The facility was designed by Daniel Libeskind, the Jewish American architect who designed the Jewish Museum in Berlin and, in 2003, won the competition to design the masterplan for the rebuilding of the World Trade Centre site in lower Manhattan. The IWM is an impressive, award-winning modern building designed around the idea of a globe broken into fragments and now put back together again. It tracks the events, people and equipment involved in modern warfare from 1916 right up to the present day.

Over the years I’ve read quite a bit about the events of the two world wars, especially the second, but I’d never come across, or at least noticed, one particular detail concerning the German Army until my visit to IWM (North). Apparently, every German soldier in the Second Great War carried a slogan on his belt which boldly stated, ‘God is with us.’

‘God is with us.’ I don’t know why this detail took me so completely by surprise. Through all of history, kings, emperors and armies have been making exactly that claim. There are political groupings and warring factions in Ireland and around the world even today in which this sentiment is frequently expressed. But for some reason I found myself particularly repulsed at the thought that God had been Emmanuel with the Nazis as they invaded Poland and began their quest to conqueror the world; that he was really with them as they set up the Auschwitz-Birkenau and other death camps; that he was truly for them as they forced an armed struggle that would cost the lives of around 72 million people – many of them women and children. How could God have been?

Well, IWM (North) has some very clever technical stuff going on as you walk around it and as I stood there reflecting on this disturbing new detail, listening to some of Hitler’s hate filled rhetoric blasting from hidden speakers and watching as images of war and death were flashed upon the walls by modern projectors, I realised that many of us make exactly the same mistake as that revealed on the belts of the German Heer.

God is indeed with us. He is for us. It was in this wonderful and life-giving truth that Saint Patrick found the only real captivity of his life. But we are very deeply and very gravely mistaken if we ever allow ourselves to imagine, even for a moment, that this is the same thing as God being on our side. He is only ever on his own!