Patrick, the Blonde and the Redhead.

It’s the late 1970s and you’re in San Francisco on St Patrick’s Day, so it’s perhaps no surprise when you turn on your radio to hear the talk show host interviewing an Aer Lingus hostess, who is representing Ireland and telling the world its ancient story. And that ancient story is represented in the popular mind by the shamrock, not least in the form of its Aer Lingus logo. “So tell me miss,” the host asks, “what is the meaning of the shamrock? What does it stand for?” Now often we’re not very good at understanding other people’s stories, but at least we can be pretty sure to know our own. Without any hesitation engendered by self- doubt Maureen answered, “Faith, hope and charity.” It is probably a positive indication of our Irish diaspora that the switchboard almost melted with callers offering an alternative explanation: the shamrock represented Patrick’s message about the Trinity, Father, Son and Holy Spirit. Unfortunately the shamrock’s supposed association with Patrick was never heard of before the 17th century, but it is certainly a fair indication of what his true story actually was.

Generally, of course, we’re all pretty good at asserting our own story, and generally not so good at listening carefully to or understanding the story of others. So we misrepresent the Other, their motives, undermine their integrity, reduce their case to laughable nonsense, and not only do we not understand or listen to their experiences, we fail to learn anything from them. It makes for good television, but it’s how division and relationship breakdown arises. In every generation new cultural ‘tribes’ form around the worst possible presentation of the story of the other. It’s been unfortunately true in Ireland.

This time it’s 2014 and you’re watching some Prime Time debate. Amongst all the debates there is one statement you’re very unlikely to hear from a panel member: “I never thought of that. Good point. I definitely need to change my understanding there.”

Terence McCaughey, formerly professor of Irish at Trinity College and Presbyterian minister, wrote a book in which he explored the very different stories of Ireland’s two ‘tribes’. Significantly, he described the two stories as being almost completely ‘imporous’ to each other. Basically, we have no idea of what the other person’s experience has been. The attitude we encourage amongst our own tribe is exclusion of the other. Reconciliation is about listening. As McCaughey says, “We should be in constant dialogue with those we abhor.”

Love of our enemies is not one of those Christian virtues that has characterized our national story. Respect for the other and listening carefully is necessary even for an effective telling of our own story. It would be hard to imagine two world views as different as those of Patrick’s Christianity and that of pre-Christian Irish society. Patrick’s attitude is well expressed in a wonderful story of his

unexpected meeting with the daughters of Ireland’s high king Laoghaire, the blonde and the redhead Fidelma and Eithne. Eithne’s surprise at this British stranger, Patrick, elicits a question about his unfamiliar beliefs. 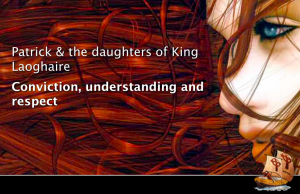 ‘Who is God? Where is he? Whose God is he? Where does he live? Has your God sons and daughters, gold and silver? Is he alive and beautiful? Have many fostered his son, and are his daughters dear and beautiful? Is he in the sky or the earth, or in the water, in rivers, or mountains or valleys? How can he be seen and loved? Is he in youth or in old age?’

There are many ways someone of less understanding, less gracious and far less loving might have responded. Patrick’s answer, which understands Eithne’s question very well is both inspiring and brilliant.

‘Our God is the God of all, heaven and earth, sea and rivers, of the sun, moon and all the stars, high mountains, low valleys, above heaven, in heaven, under heaven. He breathes in all things, makes all things live . . . He has a Son, co-eternal with Him, the Son is not younger than the Father nor is the Father older than the Son, and the Holy Spirit breathes in them. The Father and the Son and the Holy Spirit are not separate. I wish to join you to the heavenly King since you are daughters of an earthly King.’

Respect does not always mean agreement, but it always requires understanding of the other person. The Scottish Gaelic poet Iain Crichton Smith mentions one ‘book’ he hadn’t read”: “The anthology of the other is a book I had not reckoned with.”

Sometimes reconciliation is effected just by acknowledging the suffering of the other, that there were things between us that ought not to have happened.

For Patrick the ultimate reconciliation was between mankind and the God who came looking for relationship, and restoration for us to our true destiny. Justice requires the guilty to pay the price; grace usually means it is the innocent party who pays the price for the restoration.

That was Patrick’s message about Christ. I think somewhere along the road it got lost in centuries of a system of ‘power over’ others. It’s not surprising that in its corrupted versions it has been rejected by many, so that, today the one person who might be hard-pressed to get a dignitary’s seat on the review stand at the GPO, is Patrick. Jesus’ kingdom message was not about power over the Other, but loving power under. Un-heavenlike attempts to combine power under with power over the other have stained our book of history. Our original national story is not about rejecting the stranger, or the other. What is so attractive and unexpected about ‘the Jesus we never knew’ is that he turned outsiders into insiders—the rejected Samaritans, soldiers of the occupying forces, corrupt tax collectors, prostitutes. He was master of the second chance, the new story.

Maybe we really don’t understand our own story about Patrick. I wonder how we would explain it today on a radio station in San Francisco.